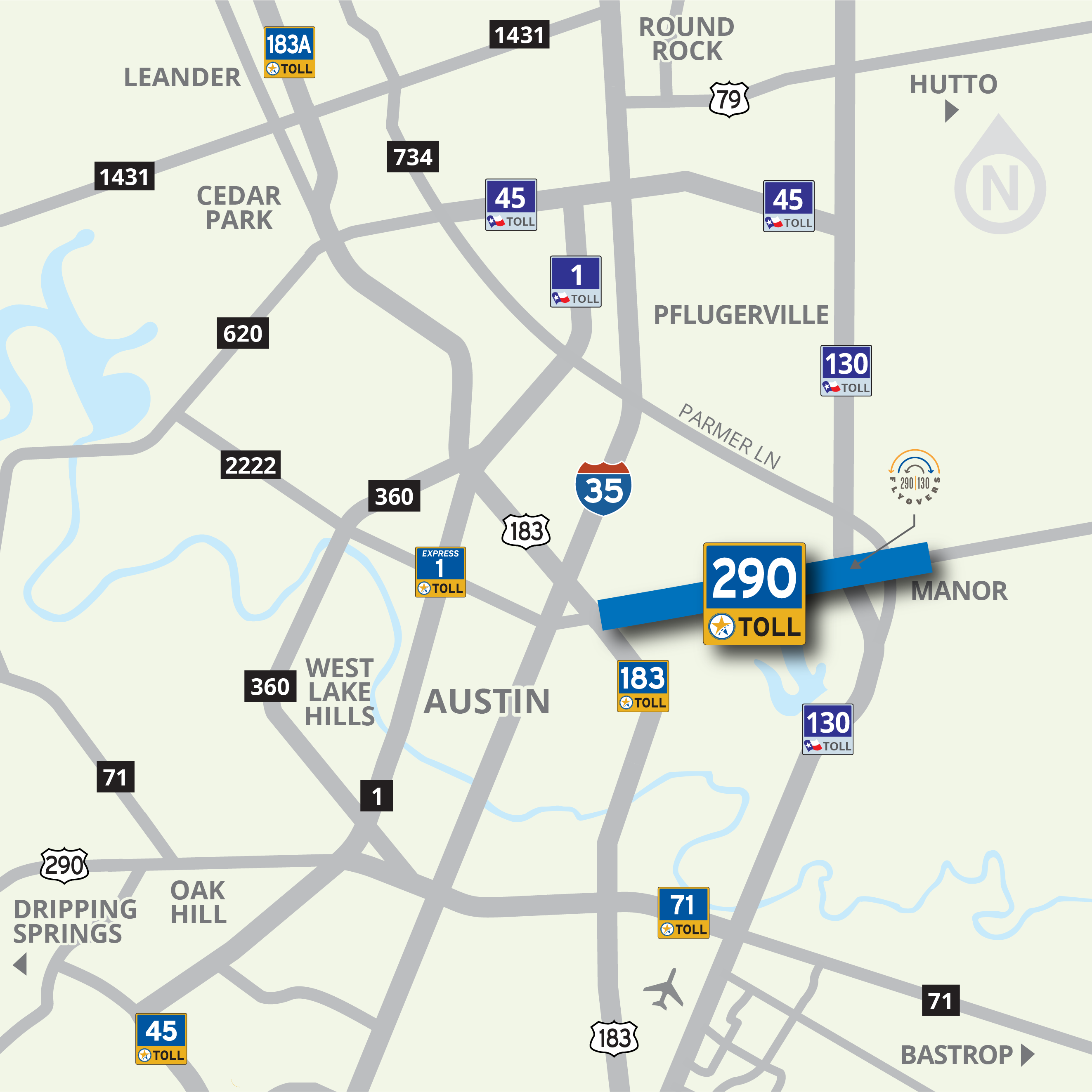 290 Toll upgraded the existing US 290 to a new expressway facility, which tripled the roadway’s capacity. It includes three tolled mainlanes and three non-tolled general-purpose lanes in each direction along US 290 from US 183 interchange to the eastern limits east of SH 130, with direct connectors at both US 183 and SH 130. The project has significantly improved travel times for both tolled and non-tolled movement.

In partnership with TxDOT, the Mobility Authority completed Phase III of the 290 Toll Project in 2021, which includes three new flyovers at the intersection of 290 Toll and SH 130. A flyover already existed linking eastbound 290 Toll to northbound SH 130. In addition to providing drivers safe, efficient, free-flowing direct connections between the two facilities, the flyovers reduce congestion on the frontage road intersection and increase connectivity for Williamson County and Northeast Travis County.

As the region grows, the Mobility Authority is exploring the feasibility of an eastern extension of the toll road into Manor.

USE YOUR ELECTRONIC TAG OR DRIVE ON THROUGH, WE’LL BILL YOU

290 Toll is completely automated with no need to stop or even slow down at toll booths.

The choice is yours – utilize the all-electronic, or cashless, tolling method of payment through an electronic tag account; or if you don’t have an electronic tag just keep moving, and we’ll bill you through the Pay By Mail program.

Customers can pay their tolls with a TxTAG, TollTag, EZ TAG, K-TAG, Pikepass or BancPass and get a 33% discount, or they can choose to Pay By Mail. Pay By Mail customers are billed using a picture of their license plate, and are charged a $1.00 statement fee per bill. Vehicle registration information must be up to date in order for the bill to be sent to the correct address. Pay By Mail is available on all toll roads in Central Texas, although you may receive separate bills depending on which agency operated the road you traveled on.

To learn about paying your tolls, see the download available below.

LEARN MORE ABOUT THE 290 TOLL

Phase I. The first phase that was developed and constructed by the Mobility Authority consisted of four tolled direct connectors and associated pavement at the US 183 interchange to provide direct access to and from the 290 Toll mainlanes. Federal stimulus funding was allocated to help complete this phase. Phase I was open to traffic in late 2012.

Phase II. The second phase was a 6.2-mile toll road consisting of three tolled mainlanes and three non-tolled general-purpose lanes in each direction from the US 183 interchange to the eastern limits east of SH 130. It opened to traffic in May 2014.

Phase III. The Mobility Authority, in coordination with TxDOT, constructed three direct connectors at the SH 130 interchange. These bridges give drivers free-flowing direct connections between the two facilities and frees up capacity on the frontage road intersection. The north-to-west and south-to-west direct connectors are tolled, and the east-to-south director is non-tolled. A flyover already existed linking eastbound 290 Toll to northbound SH 130, which remains non-tolled. 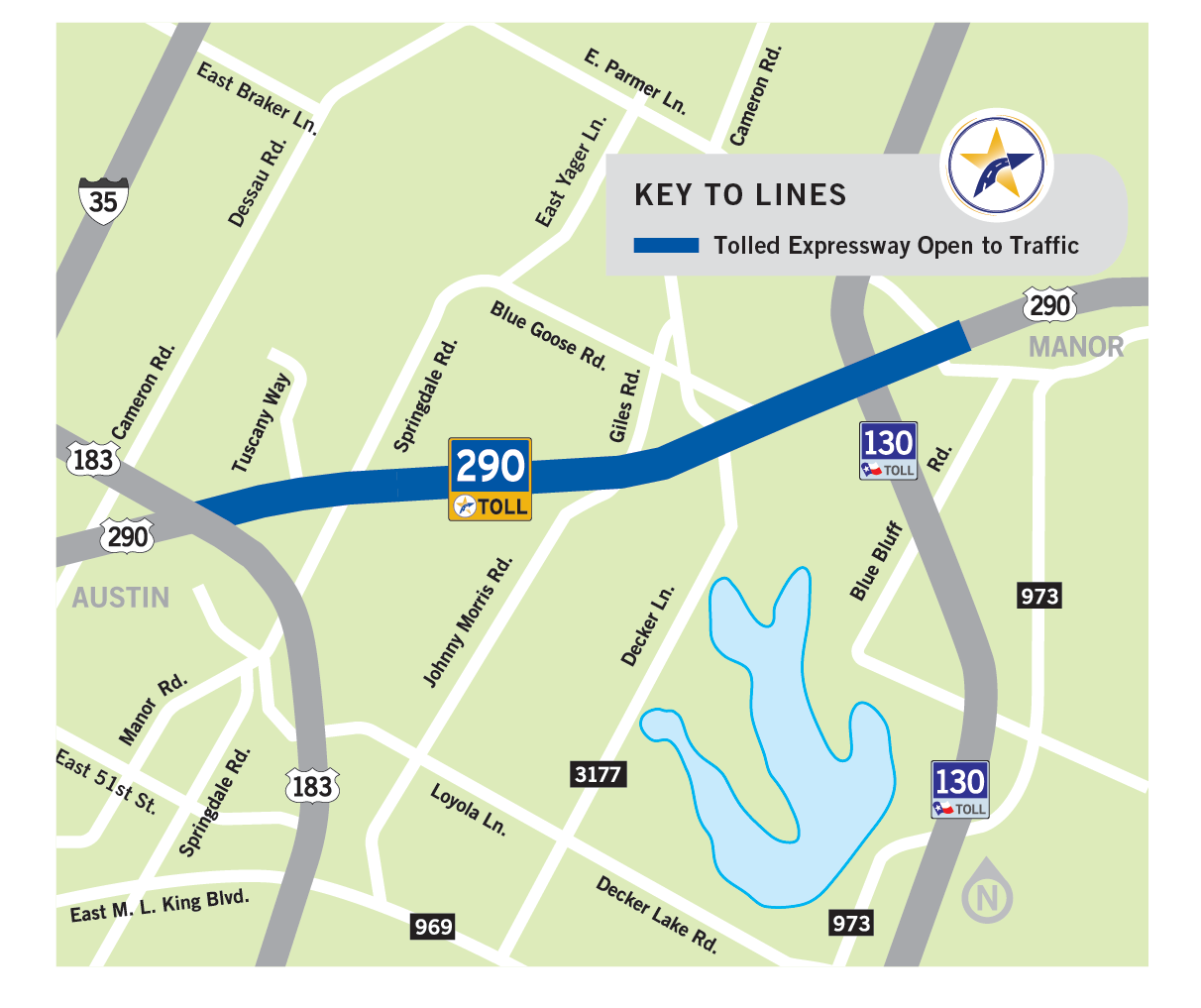 290 Toll Project Map
Previous Next
Have You Signed Up?

Don't miss a beat with our Expressway News e-newsletter!

Learn more about eligibility requirements and register for our program.

Learn More
Sign up!
Get Updates from the Mobility Authority’s e-newsletter